Frozen pipes seem to be almost a daily occurrence during these cold winter spells in New England. For instance, yesterday I was contacted by a homeowner living in all places, Europe.  He had relocated there and was planning on renting out his now-vacant home in Newton MA.  Neighbors had contacted him to say they had seen water gushing out the sliding door at the rear of his house.  Upon arrival, I could hear what sounded like a waterfall thru the front door. Needless to say when I entered things did not look good.

The culprit….. a frozen pipe!!!  A bit of advice, during winter months, whether you’re moving to Europe, going south, or staying at home there are some things you can do to help prevent frozen pipes.

Wrap those exposed pipes in your basement or crawl space with pipe insulation. Pipe insulation is relatively inexpensive and can be found at your local hardware store.  . It’s very easy to do and can be done by anyone.

During a Very Cold Spell

Any sink that is on an outside wall, you should open the cabinet doors underneath it to allow the warm air to infiltrate and keep that outside wall and pipes warm.

Open sink faucets on outside walls to a very slow trickle, this will help the pipes from freezing (moving water takes much longer to freeze).

If the worst happens and one of your faucets do freeze, open up all your other faucets to a slow trickle which will help relieve the pressure as the frozen pipe thaws to minimize the chances of that frozen pipe rupturing.

Taking just a little time to prevent a pipe from freezing will in the future reduce the stress of having water damage in your home not to mention the expense and aggravation of it all. 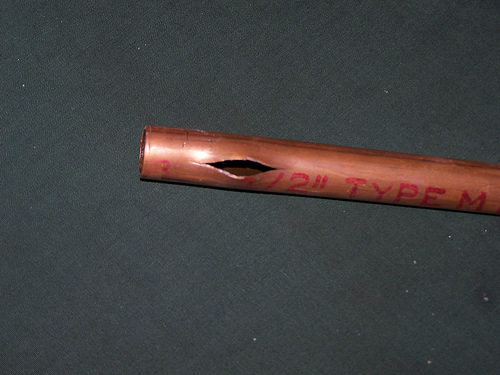